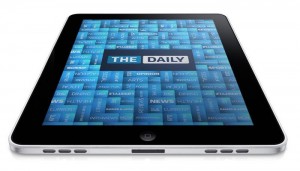 The Daily, News Corp.’s general-interest iPad news product, shut down this week. Media experts (or perhaps I should say “observers”—I’m not sure the media has any experts anymore) disagree on the specific reasons it failed, but they do seem to agree that it was doomed. The columns I’ve read and rounded up from around the web cite the following three conclusions:

1. Making it available only via iPad and without access to the open social web (readers couldn’t share links) made it a walled garden.

“The Daily’s device-bound nature limited its potential…. Locking into a single platform and not having a web front door limiting sharing and social promotion.” —Joshua Benton

“Publishing for a single platform, whether print, web, or the iPad, is a foolish move, and I think we knew that before The Daily was excised from News Corp.’s balance sheet.” —Ben Jackson

“The product, its content and the conversation around it should have been porous, able to flow in and out of social media platforms and be informed by them. Content should have been unlocked, and made available to subscribers on all platforms.” —Jordan Kurzweil

“More than 54 million people in the U.S. use an iPad at least once a month, but they remain just 16.8% of the population and 22.2% of people on the internet, according to eMarketer. That put a hard cap on the number of subscribers The Daily could acquire no matter how solid its product.” —Nat Ives

2. It was overburdened with staff—despite already laying off a third of the staff over the summer—and and a “legacy” (ie, print) org structure

“Simply put, The Daily never attracted the revenue required to support a team of 120 people. Launching what amounted to a digital daily newspaper with many of the legacy costs and structures of print wasn’t the best idea.” —Hamish McKenzie

“The Daily should have been run like a startup, a digital business, not a division within a division in a corporation.” —Jordan Kurzweil

3. It wasn’t interesting content (apparently! I never read it…see No. 1)

“Though it looked quite nice and its content was competent, that content was all-in-all just news and news is a commodity available for free in many other places.” —Jeff Jarvis

“[The term general reader means] a media executive is imagining himself and his friends (you know, normal guys) and intending to produce a bundle of content for that hyperspecific DC-to-Boston-went-to-a-good-college-polo-shirts-and-grilling demographic…. This is not to say that media properties cannot be built with the goal of reaching the mainstream [but successful] sites have been built up like sedimentary rock from a bunch of smaller microaudiences. Layers of audience stack on top one another to reach high up the trafficometer.” —Alexis Magrigal

Whatever the reasons it was closed down, I’m glad someone at least experimented with new ways to produce news. Trying stuff really is the only way to learn. My condolences to those journalists who were laid off. They should consider the no doubt multitude of lessons they’ve learned and call themselves, rather than out-of-work journos, technicians in the lab of digital journalism — scientists who can take the knowledge they’ve gleaned and apply it to the next experiment.