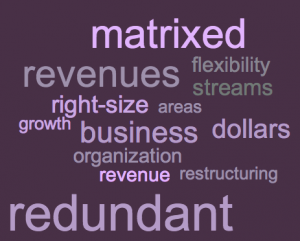 The amount of corporate-speak in the memo from Time Inc. CEO Joe Ripp regarding layoffs at that company today is truly astounding. I’d be impressed if I didn’t know it meant lots and and lots of journalists were going to be joining the proverbial breadlines as the business spins out from Time Warner and attempts to make its own way in the weary world of today’s media landscape.

Where to even begin? Perhaps with “right-size,” which means “downsize,” of course. But the entire memo is a marvel of meaninglessness: “operational efficiencies,” “reengineer the business,” “redundant positions,” “positioning ourselves for transformation,” “restructuring process,” “streamlining decision-making.”

The sentence that is truly stupefying: “A single Time Inc. portfolio will give us more operational flexibility, speed decision-making and spur the development of new cross-brand products and revenue streams to help stabilize and grow our top-line revenues.”

Every journalist there must surely be thinking, “Boy, I can’t wait to have more operational flexibility so I can help stabilize and grow our top-line revenues!”

Time Inc. should be in the business of calling out this kind of nonsense, stocked as it is with Fortune, Money and the mother ship, Time. Sadly, there’s no one left at the business to write an article about it, let alone analyze the broader trend that the largest magazine publisher in the world laying off 6 percent or so of its workers (on the heels of laying off 6 percent a year ago) is a harbinger of doom for media.

I feel terrible for all those journalists who’ve lost jobs today. Let’s hope Time Inc. truly can save itself by “dissolv[ing] the complex matrixed organization” it created in the heyday of publishing and “free[ing] up investment dollars to deploy in growth areas.” Whatever that means.

Filed under Things That Make Me Swear:

Advance Publications, owned by the Newhouse family, said Thursday it would scale back the printed edition [of The Times-Picayune, a 175-year-old fixture in New Orleans] to three days a week and impose staff cuts as a way to reduce costs…. The decision will leave New Orleans as the most prominent American city without a newspaper that is printed every day. via

Donald Newhouse is the 51st-richest person in the United States, Forbes reports. The magazine places the Advance Publications chief’s net worth at $6.6 billion. His brother, Conde Nast Chairman Si Newhouse, Jr., places a little higher: No. 46, with a net worth of $7.4 billion. Donald’s net worth was $5.9 billion in Sept. 2011, Forbes estimates, and Si’s was $6.6 billion. via

The media is clearly not exempt from the tyranny of the 1 percent. Just how many billions are enough for the people who run the media? At the very real cost of important coverage of issues that matter to us ordinary have-nots? It’s indecent and shameful.

The New York Times today published another entry into the annals of a trend I’ve noticed that I call the “But can he do it?” story. It’s a series of stories that profile a white guy “reinventing” the media, as reported by a white guy in the media. This one is about David Karp, the 26-year-old “wunderkind” who invented Tumblr. It’s filled with quotes like: “‘He has very little notion of what it means to be a conformist,’ or to measure his thinking against abstract conventional wisdom.”

Eye roll. A privileged white guy is a nonconformist? OK, if you say so.

But this is only one article, one that follows many, many eye-rollers before it with the same theme. For example, there was the Ken Auletta profile of Tim Armstrong in The New Yorker last year, in which he questions whether Armstrong’s strategy of revitalizing AOL’s home page and investing in local will pay off. (I guess Armstrong didn’t bother to tell Auletta that actually the other part of this “strategy,” the winning part, was buying the Huffington Post a week later.)

The Washington Post recently did a “But can he do it?” piece on whether Chris Hughes really can revitalize The New Republic. And speaking of white guys revitalizing the media: Can Josh Tyrangiel remake Businessweek now that it’s Bloomberg Businessweek? And speaking of The Washington Post (talk about the insularity of the media), can Robert Thompson remake it under NewsCorp?

Really: Will Bloomberg Businessweek make money? Will David Karp reinvent advertising on the Internet? Well, WILL THEY?

And also, of course, the articles never actually say or even predict whether these white guys will or will not reinvent these media properties/websites, because the writers have no idea. Which just reinforces how useless this so-called reporting truly is. No one actually knows how this business is going to go in the next few, handful, several, many years in the future. These stories might as well be headlined: “Does this white guy know something the rest of you white guys don’t?” The answer, at the end of each, is, “Maybe!” And also, if not explicitly, “I hope some day this guy or a guy like him will hire me!”

It’s boring. It’s irrelevant to most of the population. No one knows the answer anyway. And yet it’s the focus of coverage because, unfortunately, white guys run everything. So it’s a problem for women, gays, minorities and anyone else who would like see themselves and their lives and struggles reflected in the media but is completely un- or under-represented.

Final note on this: “But can he do it?” is basically is Ken Auletta’s reason for being. It seems like every article he writes is another breathless “But can he do it?” He wrote a whole book that was basically a “But can they do it?” about the two white guys who created Google. Rarely, he writes a “But can she do it?” But given that there are only two powerful ladies in media (obviously, Jill Abramson and Sheryl Sandberg), these are unusual. But fair’s fair, he did write them, though I’ll warn you that neither of these women has any answers about the future of media, either.

The response by Rachel Sklar on Daily Beast to Daily Beast’s own “Digital Power Index” and the sexism therein (just seven women out of 100) really nailed it.

“[The problem] actually pretty simple: Either you think all these industries are dominated across the very top levels by predominantly white men because there are numerous deep-seated societal norms and institutional biases that make it more challenging for women and minorities to advance as quickly and as far as their white male counterparts…or you think that these lists merely reflect the fact that white dudes must just be better at everything…. There is no murky middle ground where some of these industries are just more meritocratic and it just so happens that the same patterns that play out across historically gender-biased industries coincidentally bubble up to the surface here too.”

I think many white men believe that the world is a meritocracy because they are rewarded in all kinds of ways (rightly, they think). Actually, they started the race 100 yards ahead, but they’re willfully unaware and also somehow still proud when they win.

Sklar name-checks Anne-Marie Slaughter’s piece in The Atlantic, which I’ve also been thinking about since last week. The piece is about why women can’t have it all. She carefully unpacks tropes like, “It’s possible if you are just committed enough,” “It’s possible if you sequence it right” and “It’s possible if you marry the right person.” In the piece, she discusses family, pressure to be on site in the office and institutional prejudice against working moms. There’s no real solution floated forward (one of the problems with systemic prejudices is that it’s hard to solve them!), except maybe changing our agrarian school schedule to better match work schedules. Her conclusion is basically that we should all do what makes us happy.

I thought Rebecca Traister hit a nice volley back to Slaughter in her piece in Salon by saying that we should start by never even saying the words “have it all” ever again:

“It is a trap, a setup for inevitable feminist short-fall. Irresponsibly conflating liberation with satisfaction, the ‘have it all’ formulation sets an impossible bar for female success and then ensures that when women fail to clear it, it’s feminism — as opposed to persistent gender inequity — that’s to blame.”

Which brings us back to where we started.

Makes complete sense to me. The problem in my experience is one Vultee saw in his study as well: “We know [editors] add value, but since they don’t add content it’s been hard to make a specific case of how they add value.”

When it’s hard to explain how you add value, it’s hard to argue against getting laid off. But clearly editors do add value, as the study notes, especially among women readers — it’s just that the value is added in ways other than dollars and cents, which is difficult to justify to the types who look only at the bottom line. But the feelings of trust and professionalism are ones that brands should cultivate, not get rid of. Never has the saying “the invisible hand of the editor” been more ironic.

Great infographics in this Mashable post about women in tech, including this one:

Bit of a follow up to my earlier post about bringing back “the Company Man” in the Times today. The article discusses “the myth of the completely portable employee,” arguing that though so-called knowledge workers’ “means of production is found between their ears,” they actually don’t continue at the same level of performance if they go to a new company because the institutional knowledge they had acquired must be rebuilt. When you change jobs, the article says, you lose your “spheres of influence,” that is, your knowledge of the people and processes at the old job.

“Companies consistently underestimate how long it takes new hires to be effective in a job, especially when it comes to building relationships.”

Though external hires “can bring fresh skills and ideas, along with a healthy skepticism about long-held practices,” employers should aim for “the right mix of old and new.”

Great piece on whether it is time to bring back “the Organization Man”:

“In that model, which drove the US economy for most of the last century, employers made longer-term commitments to employees, where they invested in development to fill jobs, and where employees responded with commitments of their own in terms of performance. Jobs were filled internally with people prepared to do them, skill shortages were unknown, and employees were engaged with the needs of their employer.”

What we have been doing, focusing on “outside hiring to get skills,” isn’t really working in terms of loyalty or productivity. “Few employers are providing development opportunities. Why bother developing when we can get the skills on the outside? US large companies have been filling 66 percent of their vacancies from the outside, in contrast to a generation ago where 90 percent were filled from within.”

Lots of food for thought herein.