Two posts on the GM-Facebook face-off. Similar thoughts (and similar to those I’ve voiced before), but the lesson is that brands need to up their content game to appeal to users in new ways and meet consumers where they are. The technology (and marketing philosophy around same) seems to be evolving faster than brands can strategize, but brands must engage users — via the users’ rules — if they want to succeed.

“When brands focus more of their resources on creating compelling digital content—things that people care about sharing—they’ll be able to reach the audiences they’re after.” via

“Advertisers need to think about new end-to-end experiences that inspire and engage a far more connected and discerning audience.” via

Ultimately Facebook is a revolution, and that’s bigger than one brand. As I’ve said before, I wouldn’t root against ’em.

UCLA and HP researchers have determined that successful tweets have common — and predictable — characteristics. Per this fascinating piece in the Atlantic, the researchers’ algorithm can predict a tweeted article’s popularity “with a remarkable 84 percent accuracy” based on the principle that news’ social success can be defined by source, category, language used and the celebrity factor. But the striking thing is just how much the “source” part accounts for:

“What led most overwhelmingly, and most predictably, to sharing was the person or organization who shared the information in the first place. …Brand, even and especially on the Internet, matters. Online, the researchers are saying, the power of the brand is exactly what it has been since brands first emerged in the Middle Ages: It’s a vector of trust. ..When it comes to news, trust is actually much more important than emotion. Shareability is largely a function of reliability.”

It’s all a part of the trend of consumers having conversations with brands and vice versa — instead of being overtly bought and sold as in days past — and the resulting trust rewarded to brands who do it well. Extrapolating, content marketing and social marketing, which help brands build that trust and have those conversations, have with this study been proven out with measurable statistics.

As recently as last year, many brands’ strategy could be summarized by the following (ridiculous) two-pronged approach: 1. Chase SEO (damn the quality of the result); 2. Pray for something to (somehow) go viral. But the Internet changes with alarming rapidity, and the past year and a half has seen a major shift away from these tactics. SEO baiting abated, thanks to Google tweaking its algorithms to rank better content higher, and brands acknowledged that since viral content is by its nature unreliable, they shouldn’t rely on it.

This isn’t to say that search and innate shareability shouldn’t be considerations for brands — they absolutely should; they are foundational. But the new forward strategy is reaching users where they are (Facebook, Twitter, Instagram, Pinterest, etc.), giving them something reliable and useful, and earning trust in return.

In the case of so-called old media, they must become trusted sources again in this new landscape. Successful new brands (Fab.com to name one) are taking it even one step further with an almost post-branded attitude: Their online presence not only establishes trust with consumers, but their conversational and understanding tone also unpacks branding itself and exposes undisguised sellers as outmoded entities that peddle wares to you but don’t really get you.

Reaching consumers and establishing trust by getting them isn’t a new concept in advertising and marketing, but it’s one that must be repeatedly learned anew as consumer attitudes evolve. It’s a snarky world, but it’s the one we live in, and brand strategies must evolve or perish.

“When users feel good about an experience now, they will give feedback now. Conversely, when users have a bad experience, they are more likely to hold onto that feeling of indignation until they feel heard. …For organizations that increasingly depend on user-generated content as part of their marketing strategy, it’s important for them to (a) get users to generate content and (b) get users to generate content that reflects well on their customer experience. In other words, building an environment that encourages users to give immediate feedback should increase the number of instances of positive feedback.”

More — way more — about content strategy and how it relates to user experience at her Big Design Slideshare. Below is my favorite bit: What content means in context: 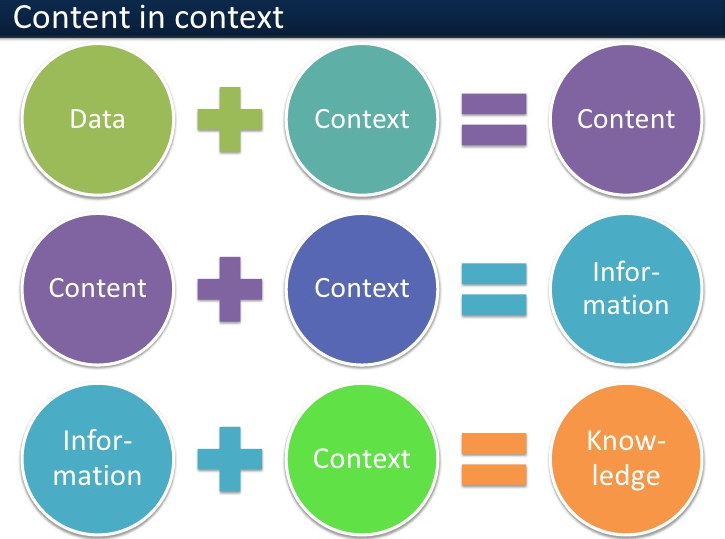 Turns out, Jason Bateman and Will Arnett run a content-marketing firm called DumbDumb. Per the NYT, they’ve just signed on to create branded content for TBS.

“The videos will be in the vein of what is known as branded content or branded entertainment…Such sponsored stories are becoming increasingly popular as marketers wrestle with the growing ability of consumers to avoid ads.”

“DumbDumb specializes in ‘content marketing’…part of the trend of ‘brand as publisher, brands trying to produce strong, relevant content’ for consumers…’content that’s bespoke to a brand, and highly shareable.'”

Electus is a content-marketing agency itself…and DumbDumb is one of its partners. It’s all very insular, but the point is that content marketing is wave of the future for brands — the way that they will reach consumers where they are — and Michael and Gob Bluth are content marketers!