Michael Wolff isn’t my favorite person. Actually, I find him quite loathsome — repellent and creepy in the same way I find Woody Allen and Ricky Gervais. He has described himself as a crank and an obnoxious know-it-all, and he has a decidedly Mr. Burns quality about him. But as a chronicler of the media industry, its rise and its collapse, the guy is singular and clear-headed. (Call me a sap: I started to pay him slightly more mind after reading his heartbreaking essay about his aging mother in New York.)

In his essay detailing the decline of Time Inc. from “greatest magazine company in the history of the form” to “farce,” Woolf levels his gaze at several factors that led to that company’s downfall. He applies his trademark snarky criticism, of course. But what caught my eye was not just the utter truth of it, which I’ll get to in a moment, it’s that in it Wolff displays a stunning encyclopedic institutional knowledge that’s lacking in most news reporting on media, let alone specific news about this merger (or sale, or whatever we’re calling this new magazine company that will be run by Meredith with mostly Time Inc. titles). This essay is precisely the kind of media reportage that’s going the way of the dodo (or, more to the point, the way of print). I doubt Wolff had to look up a single fact in his piece. The knowledge probably rolled right out his head and into his fingertips; after all, the man has studied this industry, written about it and thought about it for decades.

Compare this with the latest garbage produced by…pretty much everyone these days. I’ve talked about David Carr’s pollyanna-ish views before. The entirely of Huffington Post’s media beat apparently consists of reprinting emails and press releases. Keith Kelly and Jeff Bercovici do a fair job not out-and-out fellating their media subjects most of the time, unlike some of their peers. But I can’t remember the last time either of them actually broke news, and I definitely don’t remember the last time Bercovici actually wrote anything controversial — or original, for that matter. This “article” about Tim O’Brien leaving the Huffington Post features zero original reporting; it’s just a republication of the internal email. Really? There’s nothing more to dig in on about the company’s allegedly “rule” that a person can’t both write a book and be on staff simultaneously? That’s a new one to me and everyone else in the industry, so there’s probably something else going on. Pick up a phone and call some people. This is called news reporting.

Back to Wolff’s piece, which doesn’t have a ton of original reporting either, but is instead an informed assessment of what Time Inc. was and could have been, followed by no small amount of anger and sadness about what it ultimately became — and even a bit of enthusiasm for the small life it might yet have left in it.

Even in the context of the general decline of the magazine business, Time Inc. warrants special shame and humiliation. Not long ago, it was America against the Italy and France of its two closest rivals, Conde Nast and Hearst. But then Time Inc. became the Soviet Union. Now it is likely to be taken over by Meredith. Meredith. From Des Moines. Which is, well, Iowa.

Wolff captures my experience of the Time Inc., and I’m sure everyone else’s who has worked there, too. It’s a frustration that we know these titles and their web presences are huge and influential, and we’re proud of them, but navigating through the “warring fiefdoms,” as he calls them, and “dysfunctional management” really take it out of you on a day-to-day basis, and that is why the company has stagnated and stalled — and finds itself in the position it does.

While vast resources and considerable brain power in the company were devoted to digital adaptation, the result was to do as little as possible while building as large a bureaucratic foundation as possible. I’m not sure there is any company that has spent so much time talking about its digital future to such little effect. This was farce on quite an amazing scale.

Wolff describes the “hopelessness and frustration” of editor-in-chief John Huey, and I assure you that trickles down.

Cuts became the constant norm. Quality disintegrated. Influence dissipated. The end of the company was all but certain. The raging hostilities within the enterprise made redemption or progress or a new idea or even good will impossible.

As soon as the world’s largest publisher hired an advertising executive instead of a publishing one to lead the company last year, it was obvious and inevitable that the company was headed toward oblivion. I know there are other factors at play, mostly macroeconomic ones — the ruinous economy, the dismal advertising climate, the digital (r)evolution. But it used to be that Time Inc. took pride in its ability to survive disaster. When I was there, I was bucked up more than once by the stories of the company surviving wars, catastrophes, the Depression. It seems hard to believe that what took down such a blue-chip publisher — with its own freakin’ building in midtown! — was…what? Banner ads and CPMs? Bureaucracy? Upping circ by lowering itself to the poor quality of its competitors? Bad decision making at high levels?

It’s a sad state of affairs. I guess this is what is meant by death by a thousand cuts. It’s too bad, because Time Inc. was always a beacon of quality and determination, a leader in the field. RIP. Which is a sentiment even the gimlet-eyed crank Michael Wolff can get behind.

Disclosure: I once worked at Time Inc. (obviously!) and at AOL.

Update: The Meredith deal fell through, and Time Warner announced March 7 that it plans to spin Time Inc. into an independent public company; current Time Inc. CEO Laura Lang will step down. 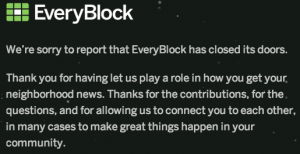 EveryBlock, a hyperlocal news start-up that used data to filter neighborhood news and spark discussion, has been shut down by its corporate overlord. Apparently, NBC News acquired it last year (which itself was news to me) but couldn’t find the business model to continue operating the site. That’s a common tale among hyperlocal news sites, but it still stings when one closes down.

It’s too bad — I think it had more going for it than many similarly themed sites — and its founder, Adrian Holovaty, seems shocked that the site has met its end. When he sold the site last year, he was proud of its success and confident in its future:

“EveryBlock users have used our service to accomplish amazing things in their neighborhoods: starting farmers markets, catching flashers, raising money for their community, finding/reporting lost pets…and generally getting to know their neighbors and forging community bonds. These days, something like this happens on the site nearly every day — which casual onlookers might not notice because of our long-tail, neighborhood-specific focus. EveryBlock has become a force for good, and it’s got a bright future.”

Sigh. I suppose it’s not particularly interesting that a start-up failed to locate a business strategy or that it didn’t “pivot” quickly enough to “disrupt” via its “MVP.” What is interesting about this case is that the site was a news-centric one that really challenged newsgathering tactics, asked questions about the use and display of public data and, in its small way, wrought lessons for the [cue horror-movie scream] Future of Journalism. It began, after all, as a recipient of a Knight Foundation grant.

Even more interesting is that it evolved so much over its short life (actually, wait, is six years long or short in technology?). When it began, it was just one news-tech guy’s realization that news should not be story-centric but instead should be gathered as structured data. He married the programmer’s philosophy of the separation of content and presentation with the journalist’s instincts for ever-better storytelling. Holovaty’s blog post from September 2006 is, in retrospect, both amusing and prescient. In it, he calls for parsing data and creating CMSes that support content types other than words, two notions that are laughably obvious six years later.

(On the flip side, also laughable are the mention of PDAs and the idea that tagging was “trendy.”)

Holovaty turned those 2006 idea germs into EveryBlock’s mapping and reporting functionality and, ultimately, he created a robust community around neighborhood news. The site put forth a notion of what the oft-dreaded Future of Journalism could be, or one version of it, anyway. It tried something new. It experimented. And the experiment did yield results; unfortunately, the conclusion was that this model might not be quite right.

In its sad and clearly hasty post today confirming the shutdown news, EveryBlock seems to acknowledge that it was a victim of the unforgiving pace of change in the online journalism industry:

“It’s no secret that the news industry is in the midst of a massive change. Within the world of neighborhood news there’s an exciting pace of innovation yet increasing challenges to building a profitable business. Though EveryBlock has been able to build an engaged community over the years, we’re faced with the decision to wrap things up.”

In short: “We tried. We’d like to keep trying, but trying doesn’t pay the bills.” And that’s too bad.